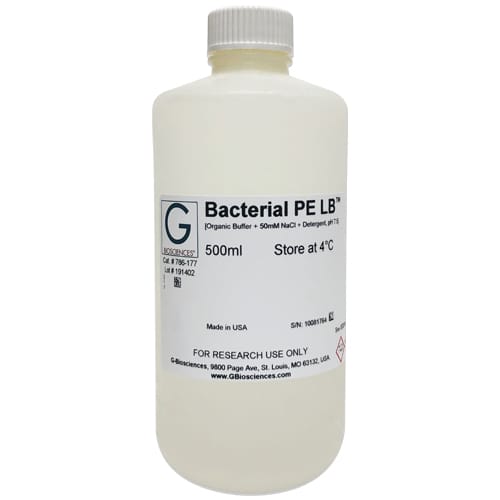 Bacterial PE LB™ has been developed for the extraction of soluble proteins and inclusion bodies from bacterial cells. It is a proprietary improvement on the lysozyme based lysis, which allows extraction of soluble proteins and concurrent removal of nucleic acids (DNA & RNA) released during cell lysis.  Bacterial PE LB™ lysis eliminates viscosity build-up, allowing effective clarification with lower centrifugal force.

This kit is provided with an optional protocol for the formation of spheroplast and removal of lytic enzyme (Lysozyme) prior to lysis and extraction of the bacterial proteins. Bacterial PE LB™ is based on organic buffering agents and utilizes a mild non-ionic detergent and a proprietary combination of various salts and agents to enhance extraction and stability of proteins.  Depending on the application, additional agents such as reducing agents, chelating agent, and protease inhibitors cocktail may be added into Bacterial PE LB™. This reagent has been tested for use with several widely used bacteria including E. coli strains.

The complete kits feature Bacterial PE LB™, bacterial suspension buffer and PE LB™ Lysozyme.  The PE LB™ Lysozyme is a proprietary mix of lysozyme, to break open cells, and DNase and RNase, to remove nucleic acids.  The enzyme mix is ready-to-use and at concentrations for optimal enzymatic activity.

The buffer only option allows researchers to substitute the Bacterial PE LB™ buffer into their existing protocols for improved lysis or for use in further downstream applications.

Bacterial PE LB™ [2X] is a modified formulation of Bacterial PE LB™ that allows half the volume of lysis buffer to be used while maintaining lysis rates. It is used for extraction of proteins that are expressed at low levels and can also be used when high concentrations of extracted proteins are desired.

Bacterial PE LB™
Bacterial PE LB™ has been developed for the extraction of soluble proteins and inclusion bodies from bacterial cells. It is a proprietary improv..
$0.00
Add to Cart
Request Quote Compare this Product
Price Inquire